When it comes to technical innovation, the Japanese are always ahead by a nose. But it’s not just in terms of motors, computer innards or domestic appliances that the land of smiles is undeniably at the top. A Japanese man has also won the imperial crown when it comes to perhaps our oldest cultural heritage, yodelling. Takeo Ischi is the best, the most famous, the best-loved and at the same time the funniest yodeller on the planet. His fascinating talent and unique gift move millions of people worldwide to ecstatic torrents of applause. He makes yodelling modern as never before, compatible with our computer age, compatible with the younger generation. His hit number „Bibi Hendl“ alone received 1½ million Youtube views in a very short time! So he’s effortlessly overtaken current big names in pop and mega-superstars. Many thousand positive comments show the international origin of the viewers and suggest their youthfulness. Countless special remixes by enthusiasts on every continent are currently being shared on the internet, including the ten-hour yodelling marathon version. The younger generation in Germany became absolute Takeo-addicts after Stefan Raab’s cult programme, „TV Total“. They can`t get enough of the yodelling master from Tokyo, who is only too ready to make fun of himself. He comes out with the craziest-sounding ideas and pulls the silliest faces. The well-off father of four whose cosy home is in the prettiest corner of Bavaria is only too glad to let his inner child run wild. That’s what makes Takeo Ischi so totally likeable, so loveable, so worthy of idolisation. 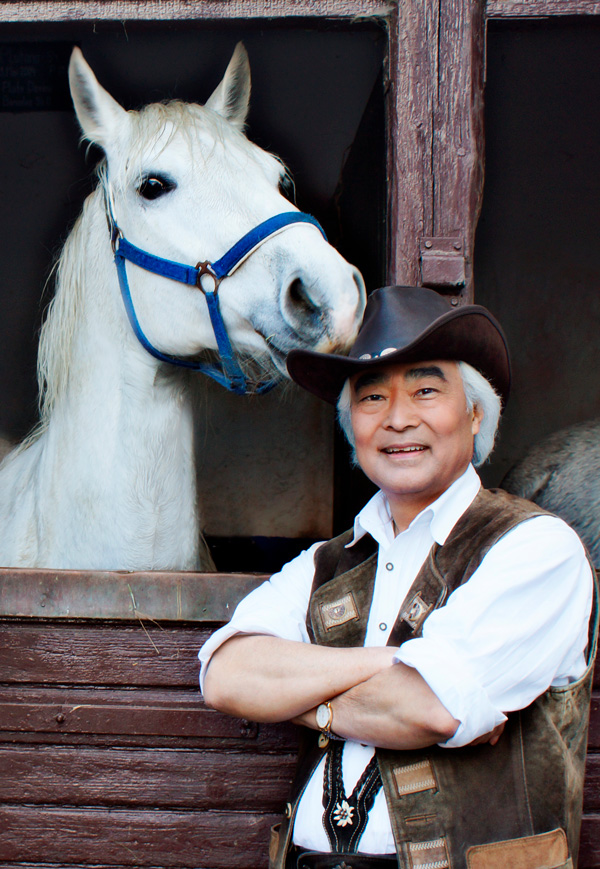 It’s as though he’s got inexhaustible batteries. Takeo not only whirls around the whole world, but also explores ever-new yodelling territory like a diligent professor. Whether online yodelling courses, the booked-out yodelling hikes through the breath-taking mountain world of his home, Reit im Winkl, yodelling interpretations of rock and pop hits, opera arias or dance floor blockbusters or the CD of his High Noon yodelling duel with colleague Rudy Schneyder, Takeo brings his tireless zeal to the theme. Only the German President can explain why he has not already received the Federal cross of honour for his tireless, worldwide and above all successful saving of the honour of our German cultural asset. Takeo Ischi is an absolutely exceptional artist in every way and without question one of the few phenomena of our modern age. To the older generation, he has been one of the really great stars of folk music for years now. And yet what other folk music star is simultaneously idolised by young people? This yodelling master is simply a cult for teens and twenty-somethings! Masses of people celebrate his Dance and Aprés Ski versions of old folk songs and age-old folk tunes such as „Bibi-Hendl“, „Appenzeller“ or „Zwei Spuren im Schnee“. At the start of his career, he was something abstract, an original. And yet long ago, Takeo crept into our hearts and thus not just paved his own way but also did a great service to understanding between peoples. Love of music knows no national boundaries, it is in all of us. And Takeo proves that though the people of the world might have different languages or skin colours, there is no difference in their hearts.